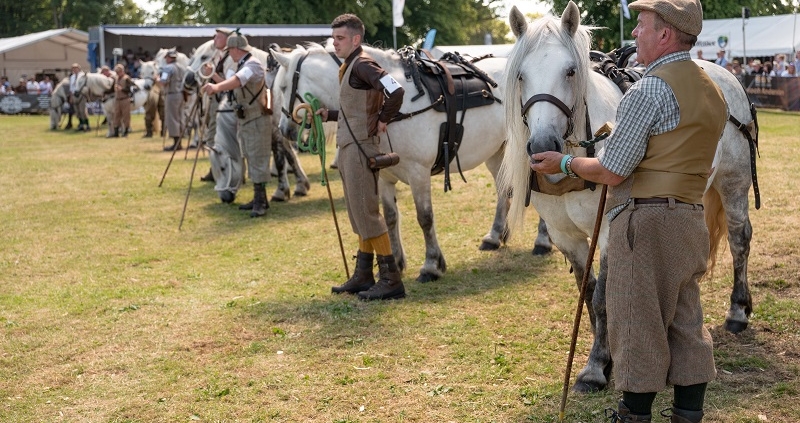 London gunmaker John Rigby & Co. is delighted to once again sponsor the annual Fred Taylor Memorial for Working Hill Ponies for a third consecutive year at the GWCT Scottish Game Fair, which is taking place on Friday 5 to Sunday 7 July at Scone Palace Parklands, Perthshire.

Organised by the Game & Wildlife Conservation Trust and the Association of Deer Management Groups, the free-to-enter competition is held in memory of Fred Taylor, who was the headstalker on Invermark Estate in Glenesk, Angus for over 30 years, who was also a great enthusiast of working hill ponies.

Building on the success of the previous year’s event, Rigby is hoping to set a new record for the number of entries. The competition sees working hill ponies tacked up in their deer saddles or game panniers, led by their handlers dressed in estate tweeds, parading the main arena on Sunday 7 July at 1:50pm, before being judged by Richard Fraser of Atholl Estates in Perthshire.

The winning estate will receive one of Rigby’s award-winning Highland Stalker rifles in .275 Rigby, which last year was awarded to Archie Hay, the ghillie at Invercauld Estate in Aberdeenshire, who was showing Spey, a nine-year old dapple-grey mare.

Commenting on the competition, Marc Newton, managing director of Rigby, said: “It’s fantastic that Rigby is involved with this celebration of all the work that goes into managing deer on Scottish estates. We are in an age when many countryside practices are being lost but to continue the tradition of working Highland ponies for carrying red deer across the hills or panniers of grouse is really somewhat special and something Rigby is proud to support.”

Hailed as a traditional deer stalking rifle, the Highland Stalker is inspired by the smaller calibre rifles Rigby made at the start of the 20th century. The rifle’s rounded pistol grip, striking slim lines and lightweight frame makes it ideal for the hill. Rigby regards the Scottish Highlands as the birthplace of stalking and a title befitting the rifle.

Adding a touch of personalisation, the winner’s rifle will also be hand-engraved with the estate, pony and ghillie’s name on a special silver shield inlaid into the stock, plus receive a wood upgrade making the top prize worth a staggering £12,000.

To qualify for entry, each pony must be working on the estate during the season. The deadline for entries is Tuesday 28 May. For more details on how to enter, contact 01738 554826.