‘Writing The Ethical Carnivore taught me how to shoot, fish and butcher animals. Most importantly, it taught me to be grateful for the meat we eat’.

People often ask me what was the starting point of my first book, The Ethical Carnivore?
It was two-fold. Firstly I was concerned about the impact of eating meat on the environment. As an environmental journalist,  I knew that emissions from livestock make up more than the greenhouse gases from all the world’s planes, trains and automobiles put together. If I was going to eat meat, I wanted to know it was not damaging the planet further.Secondly, I wanted to know more about the welfare of the meat I ate. At dinner parties I was often told the meat was ‘free range’ or ‘organic’. But I wanted to know how the animal was treated all the way from field to fork.

Only eating animals I killed myself seemed like an extreme way to answer these questions. But it did answer these questions, and more.  The first animal I shot was a rabbit with a beautiful white blaze. I cried, the gamekeeper I was with cried. I wondered if I was too soft to carry on, but when I looked around me at the country men and women hunting meat for themselves, I saw good people connected to nature. I wanted to learn the skills that have sustained mankind for centuries. It was never easy, but I did become much better at shooting and fishing and even butchery. I went on to eat more rabbit, squirrel, plenty of fish and deer. I also investigated how animals are raised on our behalf. While greenhouse gas emissions are a factor, there are plenty of ways livestock farming that benefits the countryside. I met farmers I respected for raising meat in a sustainable manner.

I learned never to waste a scrap of meat and to appreciate every mouthful. Most importantly, I learned to be grateful for the animal and the environment that allowed me these meals.

Saturday 30th June 12.30 The Ethical Carnivore, Louise Gray – Scotland’s Natural Larder Cookery Theatre Meet Louise and hear a fascinating talk on her year of cooking and eating what she killed. Alongside rabbit butcheryand a tasting of Louise’s favourite rabbit recipe. 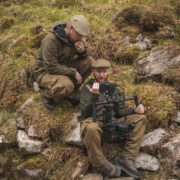 Field, River and Hill Influencers No.4 - Announcing Our Online Partners
GUEST BLOG – Mary Ann Rogers: WILDLIFE YOU CAN TAKE HOME WITH YOU!