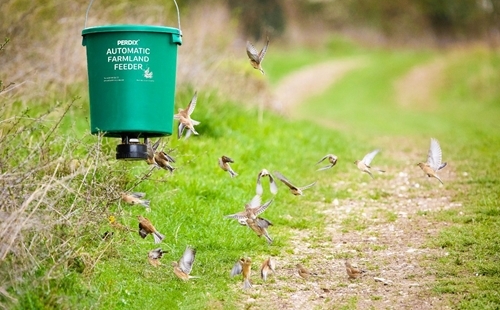 “Yes, but you only do it for the pheasants really.” How many times have I heard those words from some critic of shooting, when I describe the benefits of game management to conservation? My standard response is to ask what is wrong with that? After all, it is getting the job done. Also, I’d like to think that most game managers are conservationists at heart, and I’m certainly only doing my advisory service job after 40 years with the GWCT because I believe in the conservation spin off from the help that I give. I’m also very much for conservation in its own right, so I’m always on the look out for things that we can do to help biodiversity, even if there is no direct spin off in terms of shooting.

A little while ago on the shoot at dusk, as I was completing a feed round, the headlights picked up a lump in the hedge that I thought looked like an owl. As I drew closer the image sharpened, and there was a tawny, except, at the last moment, in my peripheral vision, I spotted the white feather edges of two prominent ear tufts. This was a special moment by any stretch, for here was the first long eared owl that I had knowingly seen.

A chat with friends revealed that they are known from the local area, if very rarely seen, while a study of the literature revealed that the population is thought to be limited by a lack of nest sites such as old crows’ nests. It turns out that you can buy a nest basket specifically designed as a replacement, so one new project for 2022 is to put a couple up in what we hope will be suitable places, and then keep a very discrete eye on them.

It can hardly have escaped your notice that we do not seem to see so many swallows, house martins and swifts these days; indeed, house martin and swift have both been moved onto the red list recently, because of quite dramatic declines over the last few decades. One of the suspected causes of this is insect declines, and GWCT research has shown that the aerial plankton these birds feed on is more abundant over farmland with conservation strips, compared to areas without.

However, the modern tidy farm, with its windows and doors all closed, and the old semi derelict buildings replaced, or restored into commercial units, may well offer less nest sites. So how about putting up some artificial nests in suitable places? These are available for all three species, and 25 years of using house martin boxes at home has convinced me of their value.

I was delighted that 2021 was a particularly successful year for our martins. I just wonder if the Cranborne Estate wild game project that now surrounds me has brought them better feeding conditions through providing extra insects from its extensive network of conservation strips. It is certainly the case that the martins and swallows often hawk along them, even if the swifts seem more random in their movements.

Having studied insects and pollination for my PhD, I am a great enthusiast for mixing in some flowers to enhance the wildlife value of any habitat that we are creating or managing for game. So, I am keen to sprinkle annual flower seed into game cover areas. Maize, for example, may make great pheasant and redleg cover, but its wider biodiversity value is low. Adding a few native cornfield annuals like cornflowers and poppies, or even just a little Phacelia tanacetifolia, can support a range of pollinators.

Tussocky cocksfoot dominated grass margins are a popular option in countryside stewardship schemes, and they can make great nesting cover for the likes of yellowhammers and grey partridges. They also offer good habitat for mice and voles, which in turn offer bumblebee nesting sites in their abandoned burrows and nests. So, why not enhance the hedge bottoms with some native wild flowers, so providing extra food for the bumblebees?

This approach to margins usually attracts a small extra payment, but I suggest you think twice about signing up. Maintaining the flowers can be a bit of a lottery and add up to hard work. When entering a mid-tier scheme a few years ago, the owner of my little Dorset shoot added a mix including birdsfoot trefoil, greater knapweed, wild carrot, sanfoin, and ox eye daisy to his grass margins at sowing time. This has resulted in good establishment, and a riot of flowers all summer long, while adding very little cost. However, if the grass takes over in the longer term, there will be no ‘failure to maintain’ in terms of the scheme, and therefore no need to restart.

No matter how you choose to use to feed your pheasants and partridges, you are bound to be helping some others too. The trouble is, the easier you make it for the desirables, like those yellowhammers mentioned above, the more you are likely to offer to undesirables like jackdaws, rooks, rats and grey squirrels. Four decades as a GWCT adviser have convinced me that there is no system for feeding game that works well for the little songbirds, without wasting lots of grub, and supporting pests.

Even my simple metal drums with slots in the base allow some spillage which can be mopped up by rats and squirrels, and during the hungry gap of early spring rooks and jackdaws can become a real pest, raiding feeders and chasing away the more timid game and songbirds. However, it is still encouraging to see how often one or two yellowhammers and chaffinches flush from under them.

I fill them with wheat alone, having long ago discovered that offering any sort of mix in ‘self-help’ hoppers results in whoever is there choosing what they like and throwing the rest away. For many years I have had a policy of sprinkling a small handful of mixed bird seed on top of hoppers in areas that are popular with songbirds. I do this whenever I pass, effectively using them as a bird table for the small birds, but even this can help the pests too.

Last winter I was very impressed with a new approach, using a small automatic farmland bird feeder from Perdix Wildlife supplies. Using a seed mix from Kings, I set it up over a patch of played out wild bird mix, giving two very brief feeds at breakfast and lunch time. It was great to see pairs of grey partridges assembling with yellowhammers, corn buntings, chaffinches, linnets and stock doves a few minutes before the spinner went off. Also, with such a range of species and their varying preferences, a seed mix that would not work in a static feeder was all cleared up in minutes, leaving nothing for the rats.

Every shoot is different, and my schemes above will not be right for all. But, whatever your own enterprise, there is bound to be a selection of conservation projects that will fit, further helping to prove that we who shoot care deeply about much more than just the gamebirds that we pursue.